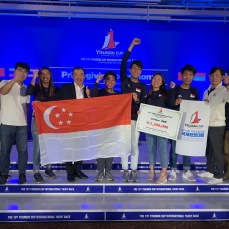 While all of us are busy with assignment deadlines during “hell week”, two of our SMU Sailors (Bernice Foo & Christian Chang) were invited to represent Singapore 🇸🇬 in the 13th Yisunsin Cup! They teamed up with 3 sailors from Singapore Polytechnic and managed to secure a spot on the podium, finishing off in 3rd Place!🥉🏆 Congratulations on the outstanding performance in the international stage!

Lets hear from the sailors through this exclusive interview with them!

1. Which class of boat did you sail on, who are the crew members?

2. Given the opportunity to represent Singapore and SMU in an international regatta, describe your feelings and experience.

Bernice: I feel extremely honoured and thankful for this opportunity. The experience was great, being in the same team with other tertiary students and not just SMU sailors also gave me the chance to learn from them and we had a great time together!

Christian: I am extremely grateful and honoured for this opportunity to represent Singapore in this regatta. Forming a team with Singapore Polytechnic (SP) sailors gave me the chance to learn from them outside of SMU and pit our skills against the other teams.

Bernice: Regatta was pretty competitive since it was a one-design fleet. The race courses were short as compared to other regattas, which meant that we cannot afford to have room for mistakes in our manoeuvres and tactics!

Christian: The fleet was very competitive since it was One Design. Furthermore, the courses were very short in contrast to many other regattas I’ve competed in. This meant that good starts, clean manoeuvres and decisive tactics would put the team up front.

4. Is it hard to manage “Project Hell Week” and the regatta itself?

Bernice: Definitely, I had to miss one presentation and rush my assignments every day after racing. It was tiring but it’s worth it in the end!

Christian: Of course! Having to miss lessons and submit assignments whilst overseas proved challenging but I think it trains one’s discipline and responsibility. I encourage all sailors to take up this opportunity should it present itself, it’s tiring but definitely worth it!

5. How does this develop you as a person?

Bernice: Sailing wise: As it was my first time doing mast for a regatta, I learnt how to assist my bowman and ensured that the manoeuvres are clean executed.

As a person: It develops me to be a better team player and also trains my self discipline as I had to juggle with both sailing and studies, having to miss one week of school. It also forces me to make use of my time productively and to get rid of idle time.

Christian: This regatta honed my self discipline as I was forced to juggle both racing and academics. With the lessons missed, the onus was on myself to catch up on what I had missed and trained myself to make use of time productively. The constant grapple between post-race sleep and studies was real, but ultimately, we are students after all.

6. How is Korea Cup different from other regattas?

Bernice: One thing that was very different from other regattas that I participated in is the weather. As it was nearing winter, the conditions were much harsher, especially when the cold wind blows.

Christian: The biggest difference was the weather! As Korea neared winter, racing conditions were harsher and the team had to adapt accordingly.

7. What is the biggest challenge in this regatta?

Bernice: The biggest challenge in this regatta was having to cope with our small Genoa sail. The Genoa was a smaller cut than others, which really affected our boat’s speed and height.

Christian: As this was the first time I competed as a bowman, I had to learn as much as I could within the short timeframe. I contacted many senior bowmans to find out some tips and tricks they employed to make their lives easier in addition to the minute details to watch out for that could potentially result in poor manoeuvres. I am thankful that as a skipper, I’ve constantly looked out for my bowman and noticed the potential pitfalls so I could avoid them.

8. What are the new things you learnt from this regatta?

Bernice: As mentioned earlier, its my first time doing mast as a role in a regatta and I learned a lot in terms of how to assist my bowman. I also learnt a few matchracing tactics in a fleet race. Lastly, as we were sailing with other tertiary students, they have a different style in sailing as compared to SMU. Hence, I learnt to adapt and adjust to my helm’s preferences.

Christian: My biggest takeaway would be teamwork and communication skills. The team had only two trainings together before this regatta which meant we had a lot of ground to cover. Furthermore, as we were from different clubs, our sailing styles and preferences are different. Throughout the three days of racing, we adjusted and adapted to each other’s preferences and styles and aimed to improve each day. Ultimately, it was a great learning experience.

The yearly tradition to celebrate Mid-Autumn festival and the iconic first party for all SMU Sailors. Cheers to our newest batch of sailors and welcome to our big family!

A Big Thank You to everyone for celebrating 15 years of SMU Sailing memories and good times with us!

We would like to extend our thanks and gratitude to the Office of Alumni Relations, Office of Student Life, the Alumni Association, friends of SMU Sailing and many of our supporters for enduring and pushing us forward through the years. Special shoutout to Andrew Tam who continues to be a prevailing force of wisdom and energy for our club.

For those who might have missed segments of the night, check out our social media page for some highlights.

Wishing everyone fair winds and see you all at the 20th Anniversary event!

“Twenty years from now you will be more disappointed by the things that you didn’t do than by the ones you did do. So throw off the bowlines. Sail away from the safe harbours. Catch the trade winds in your sails.

Every year, SMU Sailing jointly organises the largest Keelboat Regatta in Singapore with Raffles Marina, the SMU – RM Western Circuit Sailing Regatta. The event raises funds for Sailability SDSC and sees sailors from around the region gather to race against the best of the best…

Speaking of the best, SMU Sailing is represented by these 3 undergraduate teams and here are the overall results for the regatta!

Not to forget our Organising Committee!!

What a successful 21st Western Circuit Sailing Regatta! Thanks to the organising committee from SMU Windsurfing & SMU Sailing, as well as the Raffles Marina Staff – all the hard work have finally paid off. 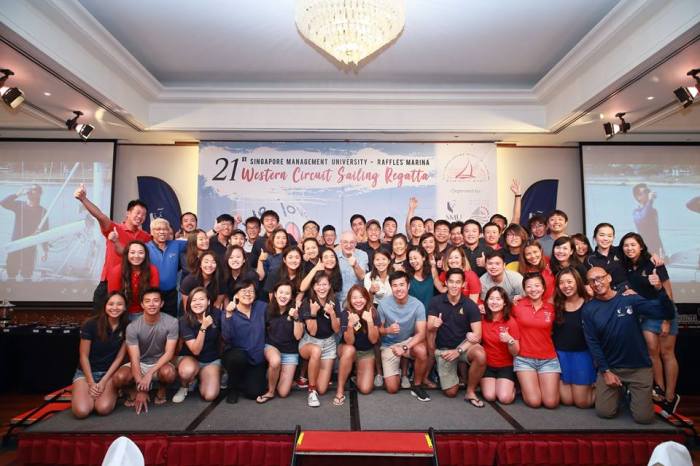 Our SMU Sailors were represented in the SB20, J24 & IRC B Class this year. Emerging second in the J24 Class isShengli, while, Born in Fire achieved third place in the IRC B Class!

This annual regatta serves as an annual gathering of all past & present SMU Sailors. Western Circuit Sailing Regatta definitely holds a significant place in every SMU Sailor’s heart –  the friendships forged, memories made & lessons learnt (in & out of sea). Huge thanks to our alumni for all your support these years & many more years to come!

For more information, check out www.westerncircuit.com.

For a change, this year’s edition of the annual alumni-undergraduate sail event was conducted using SB20s! Thankfully, the sailing conditions were in our favour this time — winds were pretty good and it wasn’t a sunny day. And, unlike the usual penalties, the sailors had to sing, pose, do circles & additional hoists and drops downwind. All the inner talents & practical skills in play were commendable and every sailor, even the alumni, were sporting! As Li Ka Shing Cup is still a race afterall, our sailors went all out to impress the race committee and took every race seriously. On behalf of the 14th EXCO & Alumni EXCO, we would like to thank everyone who came for the event! 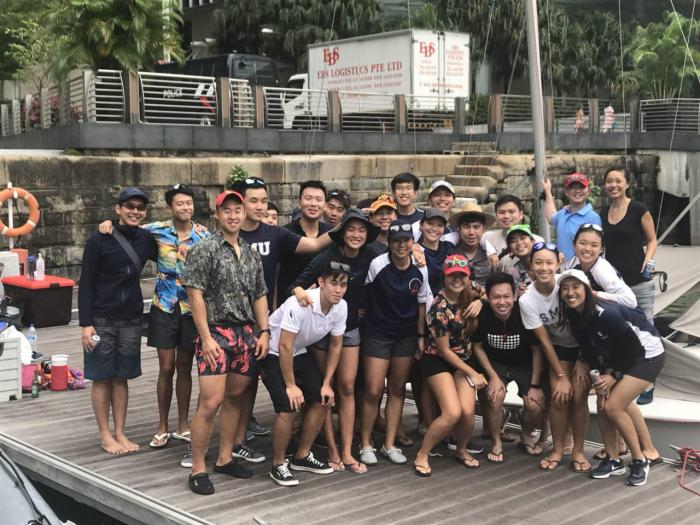 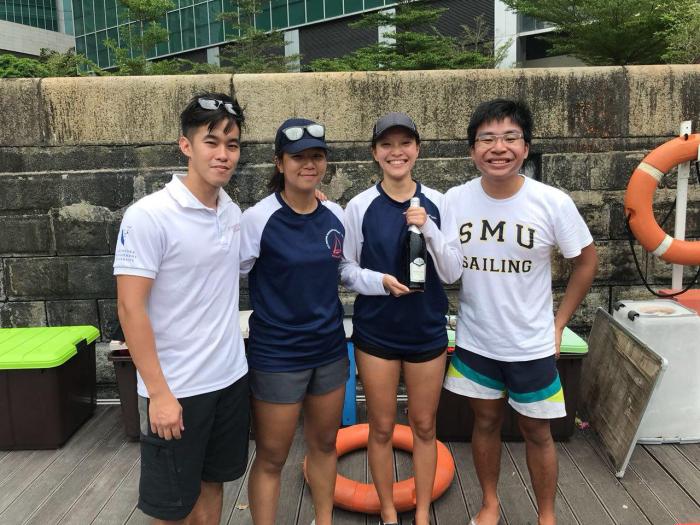 The Champions goes to Team B! [Alexi, Yumei, Cherise & Kevin] 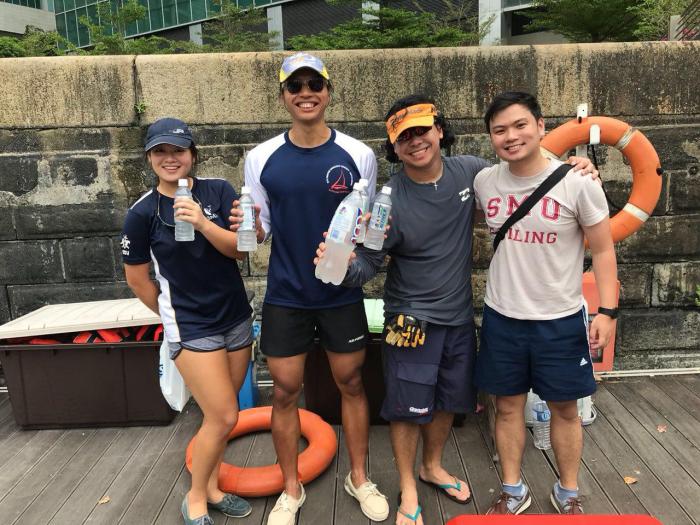 This year’s Sail Camp was held in Johor Bahru and Raffles Marina. The 2D1N trip to Johor Bahru with the sailors was filled with fun, laughter and all smiles! Our first stop after breakfast at Hua Mui Restaurant, was the TRAMPOLINE PARK! Amazingly, our sailors once again proved to be talented in all sports, including the execution of stunts at the trampoline park. The second stop was the famous duck rice shop for lunch, followed by massage/tea/shopping at KSL Shopping Mall.

Known for being bottomless pits, we ended the night at a night market before heading back to the villa to watch the World Cup! Before we knew it, it was time to head back to Raffles Marina for Bar-to-Bar, our sailing tradition where each batch sails as a team and competes against other batches. There were three teams this year — Freshies (Bryan, Kevin, Chong Jie, Ravipha, Marcus), Year 2s (Bernice, Kenny, Joel, Rebecca & Nicole) and Year 3/4/Alumni (Alexandra, BDJ, Annabelle, Cherise, Chantel, Yumei). This year’s penalties were mostly directed to the Year 2 batch. They had to swap roles: Bernice (Helm), Kenny (Bow), Joel (Mains), Rebecca (Pit/Mast), Nicole (Jib). Surprisingly, this team managed to lead the fleet of three teams. But, eventually lost out to the Year 3/4/Alumni team at the last leg. After the completion of Bar-to-Bar, everyone hung out at the swimming pool to play and eat, before ending the day.

The annual regatta held at Changi Sailing Club saw the induction of the Platu 25 Class this year! Representing SMU Sailing in the new competitive class of boats are none other than SMUve and SMU MAD. As for the J24 Class, our SMU team comprised of Jangan Main-Main (JMM) and Shengli.

Over the course of the regatta, there was an equal share of rain & shine. However, our SMU Sailors strived to do their best and ultimately, 3 out of 4 SMU teams clinched podium finishes for this regatta.

There were 6 races in total for the Platu Class and 5 races for the J24 Class. Saturday was a rainy day, bringing about strong winds and the heavy rain blurred visions in the distance. Despite the heavy rain and strong winds on Saturday, SMUve managed to finish first of the fleet for both races, placing them in a favourable position for a podium finish after the first day of racing. Sunday, however, was a sunny day with light winds. It served as a good test of our sailors abilities to trim their sails to the right angles and spot for gusty patches amidst the shifty winds throughout the course. Like every regatta, there are always things to learn and our sailors definitely picked up some learning points over the weekend. Congratulations to all the teams who won! And, to those who didnt, train harder and remain positive! 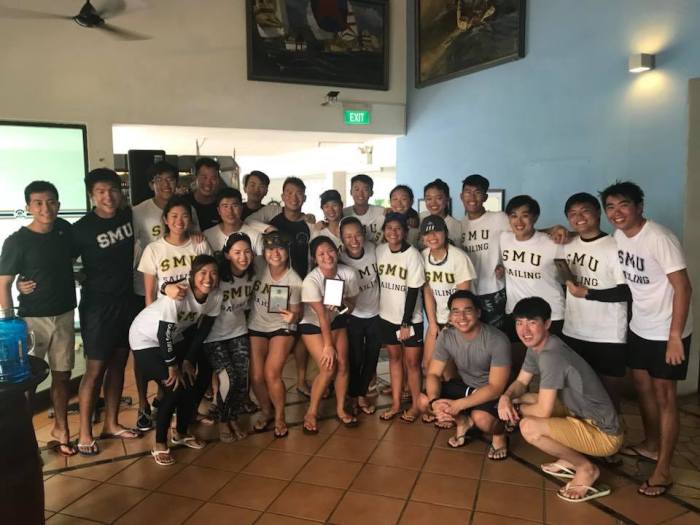 As our largest overseas regatta, this year’s TOGR was quite a disappointment due to the light winds, causing almost all four race days to have AP flags. The regatta ended with six races, compared to last year’s ten races. The last race day of the regatta ended with another day of AP flag and the crew bobbed on the water for about an hour. Before long, winds started picking up once again and was strong enough for us to complete 2 races. Team Ravi’s Ruthless Regime did well on the first race, rounding the top mark FIRST among the fleet, edging out the tough competition. As races comes to an end, all our sailors learnt and gained valuable experience that they can apply to future regattas. The club would like to thank the alumni for coming down and participating in the regatta, teaching the undergrads. Finally we would also like to extend our gratitude to SMU’s OSL for their continual support! 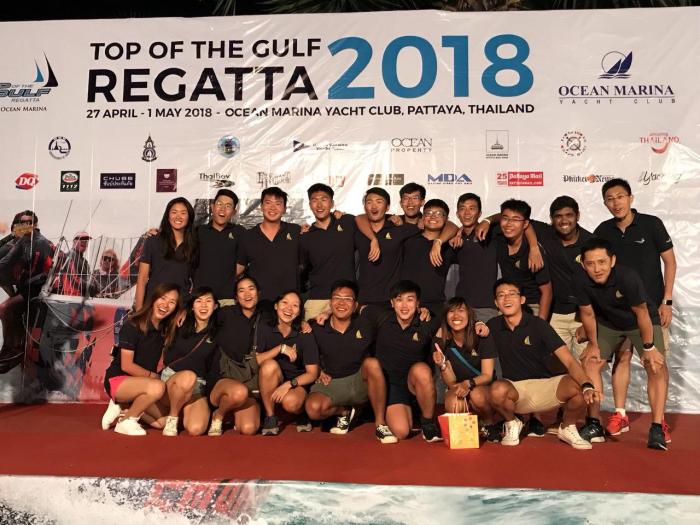